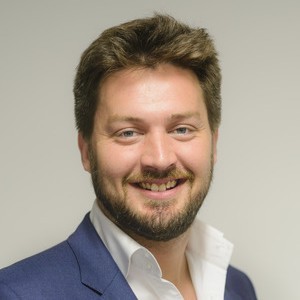 Charles is a serial entrepreneur who has focused his career on solving tough technology challenges for some of the world's largest organisations. Charles holds an MA in Law from Cambridge, and his hobbies include golf, motorsport, science fiction and early modern history.

A self-confessed 'geek' at heart, Charles has built and sold three technology companies so far in his career, and in his spare time passionately supports and mentors young entrepreneurs and start-up teams. He's former Head of Technology at Deutsche Bank Labs in London, and is currently an Associate Partner at Elixirr. His popular blog, "The Data Philosopher" explores how we think more widely about the application of technology during its design, an in particular what are the ethical and moral considerations of the development and usage of the next generation Data Science and Artificial Intelligence systems?

His TEDx talk will disrupt the popular parlance that we should 'fear' robots, that machines will 'take our jobs'. He'll argue that now, more than ever - not only is the 'robot discussion' necessary - but we have to change the way we frame it if we are to benefit and thrive in this period of exponential technological advance. He says, "From Artificial Intelligence, to the Internet of Things, or Drones and Self-Driving Cars– what’s really going on with technology today is that we’re building machines that have human-like abilities.

Like many children, I grew up with a fascination of science fiction. In particular I loved Star Trek, a TV franchise set in the distant future featuring technology that appeared so advanced it could be thought as nearly magical. However, as I grew older I realised that it was not just the technology that aroused my interest in Star Trek but the social commentary the series provided."

Charles thinks Star Trek is a wonderfully optimistic portrayal of the future where mankind can help solve other species' problems and conflicts, as in the fictional series we have reached a technological sophistication and societal enlightenment sufficient to overcome our own. We're not in that place in reality - but we could be. If we use our imaginations, rather than our fears to fuel the debate - how different could the future be?

He says, "Rather than worry about robots stealing our jobs – what if we were to proactively automate industries that were essential for our survival, and incentivise people and organisations for doing so. Imagine not having to work and what you could do with your life instead?"

This wave of technological change in our lifetime is radically different to all that has come before, so rather than fearing it, we need to understand how to steer the potential for such technology, in order to realise a better future.