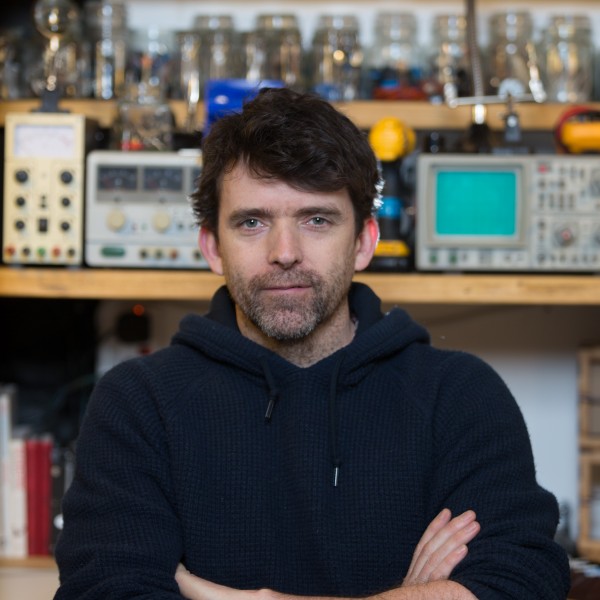 "What if the borders between humanity, technology, and nature are only in our mind, leaving us poorly equipped to navigate our uncertain future?”

David is an experimental robotic engineer and designer working within the contemporary arts in Bristol. Influenced by his background in dance and puppetry, his work interrogates the ongoing co-evolution between machine, human and animal; reframing technology is intimately bound to our humanity, and not outside of nature as we traditionally view it.

Disruption is undeniably David's forte. A few years ago he led a unique team in an experiment, code name: Rusty Squid. A trans-disciplined ensemble of scientists, punks, and artists began to occupy the no-man’s-land between engineering, art, and design. Harnessing kinetic and sensory technology alongside artificial intelligence, the laboratory hijacked robotic technology as a fundamental form of human expression rather than a utilitarian tool.

David's TEDx talk will explore this intersection between humanity and robotics, and will argue why we need to change the way engineers, artists, and scientists work. He'll reveal how his experiments are striking a nerve and disrupting long held cultural atttitudes in the fields of engineering and art, creating new possibilities that will shake the foundations of these disciplines.

David says, “We suspect it will only be 20 to 30 years before a company on the scale of Disney emerges where robotics is the fundamental medium for creative expression. But far more important than industry building is the chance to participate in this civilisation-defining moment in history. We have only just scratched the surface of this work but it is clear that if we ever wish to inspire a fundamental shift our cultural identity, we must first start with integrating ourselves. We are entering unfamiliar landscape…where the boundaries between humanity, nature, and technology are starting to blur. Rusty Squid is redrawing fresh maps and a building new compass to help navigate this unsettling and rapidly evolving world”

We are simply not ready to face this Century. Traditional maps that once defined us as above nature offer little guidance, and familiar compasses that indicated our being in control of technology no longer point the way."