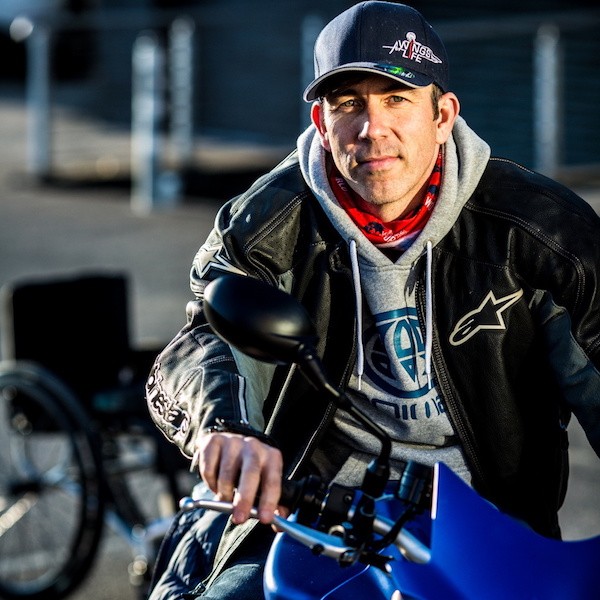 Martyn is a lead presenter on The Global Mountain Bike Network. A self confessed 'chain-spotter' - he has always been a fan of anything on two wheels. He started riding motorcycles competitively and winning titles age 12, and at 18 he switched to mountain bike events, becoming British Champion in the National Mountain Bike Trials. He quickly gained status as something of a legend in the mountain biking world, winning numerous British Biketrial national titles, and achieving a Guinness World Record for the Mountain Bike High Jump.

He's also passionate about the bikes themselves - and has created his own innovative frame designs, and masterminded the travelling extreme sports show – the Animal WD40 Action Sports Tour – touring the length and breadth of the UK.

His skill, nerve and drive led to him gaining acclaim around the globe, and his love of bikes coinicided with the rise of niche YouTube videos. He says, "My media profile rose quickly and I featured in the cycling press regularly, securing numerous front covers and features in magazines. My career progressed from competing to a focus on performing in live events and stunts, this all coincided with the internet explosion which subsequently lead to great opportunities in video creation."

In 2012 Martyn released 'Road Bike Party' which was a global hit on YouTube, gaining millions of views in it's first week. His videos have since been viewed online hundreds of millions of times.

But in 2013 his life on two wheels changed as he knew it forever. Whilst performing in a live show he had a serious accident. The subsequent injury left him paralysed from the waist down and devastated his riding career. He entered a time of huge adjustment and soul searching. Little did he, know, his greatest days of riding were still ahead of him!

Martyn came out of hospital with a determination to try new things - from kayaking to wheelchair racing. But the biggest challenge was getting back on the bike - and learning how to ride without the use of his legs.

Martyn has always pushed boundaries - before his accident he disrupted biking by seeking out places to take a bike that you weren't meant to go, or no one knew you could go. Now his talk for TEDxBristol will explore how he is 'disrupting' what people might think of as the physical limits or constraints of a wheel chair user. Despite his debilitating injury Martyn will explore with his straight-talking and honest positivity how he learnt to ride again, what it took to get up off the floor and start his career again, and how he want's to change the perceived image and capabilities of wheel-chair users. He describes himself as 'extraordinary from the waist up!'.

"My ambition is to now continue to break the boundaries down of where I can take my chair. My ambition is to create a video or image in the future that has someone who is able bodied look at it and think 'Christ I wouldn't want to be walking there!' ".

If you want people to notice you, then you need to stand-out from the crowd. For me that sometimes meant literally riding above their heads, doing things differently. To succeed in my goals I've needed to go against the grain - to be unpredictable and change people's expectations of what is possible.