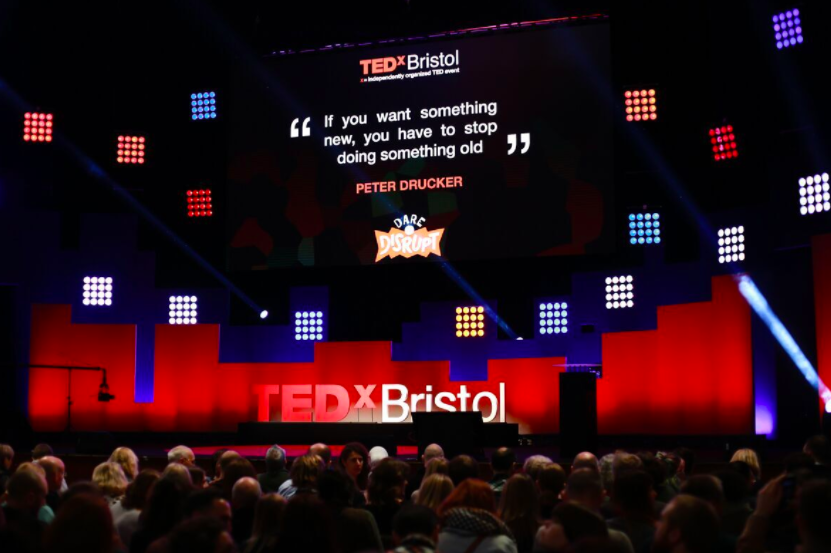 TEDxBristol 2017 WRITE UP: A DISRUPTIVE TWO-DAY TAKE OVER AT COLSTON HALL

TEDxBristol 2017, the largest TEDx event in Europe, took place at Colston Hall on 2nd and 3rd November, with over 2,500 delegates attending across the two days, plus thousands more worldwide on live stream.

This year’s theme, Dare To Disrupt, saw 16 speakers take the stage to share their stories, experiences, and journeys of positive disruption on a local and global scale.

Bristol’s own Mena Fombo kicked off the main stage with “No. You Cannot Touch My Hair.” The thought-provoking and unflinching talk centred around Mena’s campaign of the same name, which has gained international recognition challenging the social acceptability of the objectification of black women, starting with a focus on their hair.

Charles Radclyffe walked the crowd through the steps to surviving a robot revolution – a potentially bleak situation, which he spun into a positive forecast using knowledge gained through his blog, the Data Philosopher.

Nura Aabe’s compelling and emotional talk, “No More Us and Them: Disrupting Attitudes to Autism” followed her son Zak’s journey since being diagnosed with autism, a condition not recognised by her native culture. Feeling “stuck between to worlds” Nura was shunned by the professionals claiming to help her, and her community who were unable to support her. Her resilience, positivity, and overwhelming love for her son has seen the pair thrive in ways she had never expected.

Between talks the Lantern Room became the place to be, with Speakezee hosting Salons - mini-talks where audiences can interact and engage - with professionals covering topics touched on by TEDxBristol speakers, including autism, sexuality, science and curiosity, and climate change.

Martyn Ashton was one of Thursday’s most anticipated speakers. A pro-BMXer whose life as he knew it was turned upside down by a devastating crash that left him paralysed, Martyn’s sense of humour and positive attitude in the face of adversity left him thinking, “how can I be the best paraplegic there is?” After a few failed attempts at other sports, he’s back on his bike and doing better than ever.

Esther Crawley’s message to “do what is right, not what is easy” resounded with audiences inspired by the day’s disruptive theme. During lunch breaks, Mike Lloyd brought his renowned AI workshops to the Lantern Room, and Hodos Consultancy, who coached this year’s speakers to TED standard, hosted Talk Like TED workshops, teaching delegates to be confident, assertive, and engaging when speaking in public.

Next up was Alan Bec, who contracted Chronic Fatigue Syndrome from an ear infection six years ago. Irritated by empty questions like “how are you?” Alan decided that feigning interest in others is both unhelpful and unsustainable. This realisation lead to the invention of the Wellbeing Indicator Badge (WIB), using numbers to reflect his mood and energy levels so people can react to one another’s needs on a more ‘human’ level.

Antonia Forster’s talk “LGBTQ and Polyamory in Animals… Yes it’s Natural!” hit home with her opening line: “Sometimes saying three words out loud can change your life.” Antonia educated the crowd on just a small selection of the numerous species found in nature that don’t conform to human standards of what is “natural,” and summarised the poignant and informative talk with a rap, perfectly reflecting her originality, and unapologetic attitude to bigotry.

After a musical interlude from jazz and soul singer Toby Corton and Indian improve musician Roopa Panesar, Joshua Luke Smith closed the main stage for Thursday with his touching mix of spoken word and heartfelt speech. Dealing with the heart of the matter, Joshua touched on global topics from modern day slavery to pornography to the refugee crisis.

Day two was off to an inspirational start, as Anna Starkey opened the main stage with her talk on curiosity, encouraging audiences to “push the big red button” in their minds, which holds us all back from discovering the world to our full potential. Split into a story of three types of curiosity illustrated by cats, the talk was a resounding win to start the day.

Dr Clive Colledge destroyed stereotypes in his talk “Why Baby Boomers, Millennials, and Generation X Don’t Exist.” His idea that it’s the sharing of values that unites us, rather than the date we were born, is what the TEDx message is all about: we were born to connect.

Dr Madge Dresser’s talk “Good People, Hate Groups, and History” touched on the prevalent issue of statues and racism. She compared Robert E Lee’s monument in Virginia, the site of the recent Charlottesville race rallies, to that of Edward Colston, the Atlantic slave trader whose statue still stands in Bristol city centre.

David McGoran opened our eyes to the way robotics will help us deal with a future we’re unprepared for, and Natalie Fee urged us to stop flushing plastics down the loo. In a major act of positive disruption, Natalie and her company City to Sea have convinced nine supermarkets to switch to paper-stick cotton buds, preventing 320,000 tonnes of single-use plastics at source.

The extraordinary Samantha Lindo provided Friday’s musical break, and our compère Edson Burton shared a new poem for Bristol in his moving spoken word set. Kelsey Hoppe’s rational and informed take on travel in a time rife with fears of terror encouraged listeners to ‘own their decisions’ when travelling, and consider the real risks we take every day, which are far more likely to harm us than the atrocities we see in the news.

Bex Baxter of Coexist launched the pioneering “Period Policy” which helps women feel empowered at work during their period. Her talk, “Ending a Workplace Taboo. Period.”  was a powerful reminder that we don’t need to fight against our nature. We can work with it to benefit people and businesses alike.

Ricky Reid was not on the programme of events for TEDxBristol, though he had been planned for the bill. In the weeks before the event, His application to become a permanent UK citizen was declined, so Edson Burton took to the stage to share an excerpt from Ricky’s proposed TEDxBristol talk. A life of crime ultimately lead to prison time for Ricky, where he reflected upon the lessons he would like to pass to his son, helping to guide him down the right path in life, unlike the ones he had taken himself. The emotional tale was the perfect segue into the final talk of the day.

Clayton Planter, founder of Street2Boardroom, is a true inspiration. The Community Interest Company helps young people from disadvantaged backgrounds apply skills learned on the street to the workplace, where they can thrive in a more productive career path than a life of crime. Clayton’s unwavering belief in himself lead him to achieve the greatness he knew was within him – an uplifting end to a fantastic two days.

TEDxBristol would like to thank their 30+ generous sponsors and all the amazing volunteers who made this landmark event possible. Special thanks to the community partners who made over 260 seats available for free to Bristol’s diverse community groups.

All talks were streamed live on the TEDxBristol website across both days, and will be on the TEDxBristol YouTube channel in the coming weeks. Sign up to our newsletter and be the first to know when you can watch the amazing and inspirational talks again. And you can follow us on social media for on going updates and flashbacks to this amazing event.